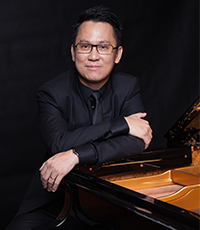 Among the highlights of solo performances are appearances at the John F. Kennedy Center for the Performing Arts and National Institutes of Health in Washington D.C., Thailand’s First Mozart Piano Competition and Festival, the International Piano Festival by People with Disabilities in Osaka and Vienna, and KL Piano Gala Concerts. As an educator, Yew Choong has presented lecture recitals, with a focus on historical performance practice, at the international and local conferences in Australia, Hong Kong, Malaysia and Thailand. Yew Choong has also been invited to give master classes and workshops in Indonesia and Thailand, as well as adjudicating competitions in Malaysia. Recently, he has been invited to serve as research review committee for Mahidol University College of Music in Thailand and has contributed an article in Mahidol Music Journal.

Yew Choong is currently Assistant Professor at UCSI University Institute of Music in Kuala Lumpur. He has designed a range of Master’s music courses, and teaching applied piano, piano literature, performance practice and music theory. He also serves as a research supervisor for both undergraduate and postgraduate research projects.